GUEST POST: "In the Light of the Eclipse" - by Bryan Caron (Fire and Ice Book Tours) 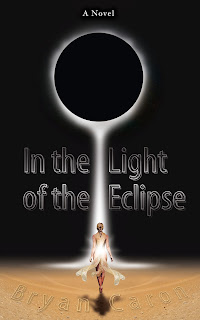 BLURB
"Where God so loved the world, Heather (or as few have dared to dub her “the goddess of condemnation”) holds a much crueler hand over her inhabitants. Every seventeen years, under her ever-watchful eye, an eclipse renders her land dark, taking the soul of everyone over the age of seventeen to the land of the unknown nothing. In its wake, Heather bestows the gift of a child upon the land. Some believe this child has special powers; others believe she inhabits the souls taken by the eclipse. But no matter the belief, one thing is certain—without the child, the land would crumble.

Most accept the eclipse and live every breath with a love unmatched by any other. This is especially true of Zoe, whose seventeenth year of breath nears ever so close. Born under the eclipse, Zoe understands her life is a gift and that she will return that gift in kind—whenever that day may be (that is until she falls in love and discovers the dark secrets hidden in the heart of Heather).

Still others yearn for a longer life and curse Heather’s name. One such person was branded the name Kayla on her day of breath eighteen years ago. Unable to comprehend the meaning of such viciousness, Kayla believes such a sacrifice is unnecessary, even for the worst of mankind. Little does she know that a mysterious traveler may hold the key to ending the eclipse forever.

Zoe and Kayla are best friends.

This is their story."

ABOUT THE AUTHOR - BRYAN CARON 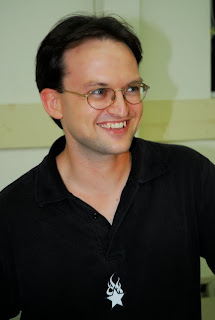 Bryan Caron is a multi-talented, award-winning artist with works in several mediums, including print, film and design. After acquiring a bachelor’s degree in creative writing and an associate’s degree in computer graphic design, Bryan studied filmmaking and film editing while working at a performing arts studio in San Diego, California. He took this knowledge to write, direct and edit films under his banner, Divine Trinity Films. Soon after, he would team up with the Fallbrook Film Factory, a non-profit film consortium, to continue his growth in the areas of writing, directing and editing, all the while fleshing out his talents in fiction writing (publishing Year of the Songbird and Jaxxa Rakala: The Search in 2013), working as a graphic designer, and beginning his first blog: Chaos breeds Chaos.

His works as writer and director include the short films My Necklace, Myself (Best Screenplay, Short Film, 2009 Treasure Coast International Film Festival) and 12, the feature film "Secrets of the Desert Nymph", and the commercial "Charlie’s Ticket", which ran on dozens of television stations and in movie theaters in San Diego County to advertise the Fallbrook International Film Festival. He works as editor include the short film "Puzzle Box" and "No Books", the first of several episodes he has edited for the online sketch-series, "Treelore Theatre".

Of the majority of books in the marketplace today, there is at least one page that mentions a person or persons who helped in some way to make the book possible. It’s in some ways an awards speech that’s meant to show gratitude to those who had a hand in the book’s ultimate creation, whether that be giving feedback on different drafts of the book, supplying the author with their undying support, or just someone who stayed out of the way while the author painstakingly created their new world.

But no matter the gesture, the author gives them thanks, even if the author and the receiver are the only ones who know the reason why. I’ve had two books published this past year, and while they both had an acknowledgments page, the first didn’t have a lot to say about the reasons behind it, while the second did explain a bit about the production of the book.

In my newest novel, In the Light of the Eclipse, I have two separate acknowledgments, one with a slightly vague reason behind it, the other with no explanation whatsoever. If I may, I would like to take this time to expand on the reasons behind them.

I would like to thank the dreamers who challenged me to write this tale:
Amber, Sammi, Rebecca, Dustin and Heather
Your inspiration is everlasting

Who are Amber, Sammi, Rebecca, Dustin and Heather? They are kids that I see every Christmas Eve (and have for the last, oh, I don’t know, probably eleven or twelve years, ever since Rebecca was just a wee little baby). Two of them are my niece and nephew (bet you can’t guess which ones) and the other three may or may not be related to me (as in, I think they may be second or third cousins or some such thing… who really knows).

A few years back (when the kids were anywhere between 5 and 16), I mentioned to them that I was a writer. In typical witty fashion, they all razzed me about it, unable to believe me in the slightest (or in the very least, teased me about it, as we tend to do with each other). Perpetuating the banter, I asked them to come up with characters and a story for a book that I would then write for them. They didn’t miss a beat—they spent the next hour or so spouting out all sorts of things.

The two main points to keep in mind was that Amber and Sammi were to be the two main characters and that something magical would happen. Beyond that, there were a lot of ideas, suggestions and thoughts thrown around, all of which were just amazing. I couldn’t wait to write it all down.

I thought about it all the way home, filling in the gaps and making it a cohesive story. As soon as I could, I threw it all on the computer, reorganized it, added some stuff here, removed some stuff there and ended up with a perfectly decent outline. I even went and wrote a few opening paragraphs.

Then, life got in the way and the story faded from my mind in favor of other projects that demanded my attention. But every Christmas Eve, as we gathered to enjoy the holiday, the thought of that story returned and a new fresh energy to write the book emerged, only to diminish when the holidays were over.

A couple of false starts and minor changes later and the book was going nowhere. The group did ask about it a couple of times and my main excuse was that I was waiting for the opportunity to get it published before I wrote it (I know—weak—but what are you gonna do?).

At one point, I asked my place of work (which had its very own printing press) how much it would cost for me to print a few hundred copies (one for each of them, and then to have some on hand to sell if anyone else might like to have it) and they all but ignored me, so I started looking for other avenues. When I found a way to publish my other books, I had no more excuses. It was finally time to focus and bring this story to fruition.

The second acknowledgment is actually a dedication:

This one was added quite recently after my grandmother, Paula, passed away. Her spirit lives on in a lot of lives because she was entirely selfless, always looking to help others before herself. For that reason alone, dedicating this book to her was a no-brainer, as she embodies what In the Light of the Eclipse represents at its core.


To do anything less would have been unacceptable.

Bryan is giving away 3 signed copies of his book. USA only. Enter through Goodreads!

Email ThisBlogThis!Share to TwitterShare to FacebookShare to Pinterest
Labels: Bryan Caron, Fire and Ice Book Tours, In the Light of the Eclipse