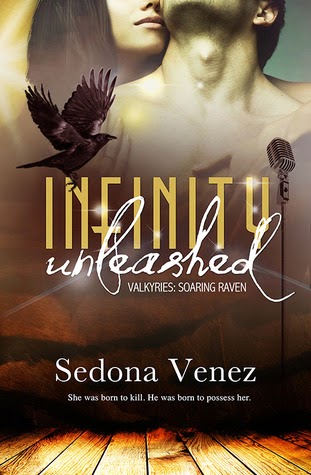 In a matter of minutes he had kidnapped me, stripping me of everything...money, family, and freedom. It was humbling, depressing, and damn infuriating but I refuse to go down without a fight. I refuse to be defeated.

Boulder will find me. I didn't know how, but I felt it deep in my soul.

Could he accept me without judging?

That's where most men failed. Accepting the real me. But after years of hardening my heart, and sealing it behind a steel cage, I was ready to give myself to him freely. Knowing, that he planned to take everything I offered with both hands, until all I thought of...and wanted...was him...

ABOUT THE AUTHOR - Sedona Venez
Sedona Venez aka T.L. Clarke is the author of the New Adult Credence Curse series, and the New Adult Valkyries: Soaring Raven series. She is a NYC girl (go Brooklyn!) with a slight obsession with her iPad, Pinterest, television shows Pawn Stars, Castle, and Face Off. Her love of music, tattoos, rockers, alpha men and wolf-shifters inspires her edgy paranormal and contemporary romance novels. You can find out more about Sedona and her work by visiting

LONG STORY SHORT...
Vampires + werewolves + lies + immortal beings + tiger shifters + fae + ravens + singing superstar + lust + visions + a whole bunch more = one heck of a sequel to Infinity!  This sequel continues the story of Infinity, superstar realized supernatural being who has three other supernatural beings all bent on claiming her: two for power, one for love.  Which one will succeed...and will this start another war to which the Fire and Ash war pale in comparison?

Just as its predecessor, this intriguing story is NSFW and 18+ (especially the ending....hubba hubba).  The silky smooth writing style will bring you on an intoxicating whirlwind that will leave you demanding more when the infuriating cliffhanger ending occurs.

LONG STORY
The Good
We've seen a plethora of vampire/werewolf stories lately....but how many of those stories include a rich singer, tiger shifters, fae, creepish ravens, and immortals amusing themselves with the mess that mortals have made?

Well, maybe two.  :)  Although in fairness, this book is the continuation of a story, so....

Again we find Infinity as the main character.  She's a superstar realized supernatural creature who has been kidnapped away by the nefarious Mason - a man (cough *tigershifter*) who is after her for the power that he will be able to claim as her mate.  Too bad that a kick a** vampire also wants to claim her for the same reason.  Will Boulder, Infinity's true mate, be able to reach her before it is too late?  Will their love start a war?  Will Infinity be rescued, even as she begins to realize the truth about her heritage?

The prequel ended on a maddening cliffhanger.  I was rather glad that I was able to pick this book right up and begin reading instantly.  Sadly, the final book in the trilogy has not yet been published, so I'm over here cooling my heels while trying to wait patiently for the next book in the series to be released.  Gotta know what happens!!!!!!!

Much of what I said about the first book is true about this one as well.  This shouldn't be too surprising - same author, same story and all.  Venez here continues her rather unique book  in the middle of a genre that is being done to undeath, and it is still rather intriguing.  I liked this book more than the first one - not sure if it was because it flowed together a little better, or because I felt more strongly tied to these characters since I knew them better, but I liked it better.  Can't wait to see what is in store for the next installment!!

Oh, and still quite a chick flick - gotta love the intensity of some of these scenes (even if the science doesn't always make sense).  :)

The Bugly (bad/ugly)
Um, same quibbles as for the prequel to this book (minus one):

1) It is still too confusing to figure out who is talking at the beginning of a chapter.  There should be subtitles to the chapter notation or something, anything indicating who is talking so the initial "who the heck is this?" work on the readers' part can be avoided.

2) Seriously, humans should not be this dumb....

3) This book really needs a chart in the back that shows who is what: species, rank, position in the Council, etc.  I was getting really confused about who was what and where and why.